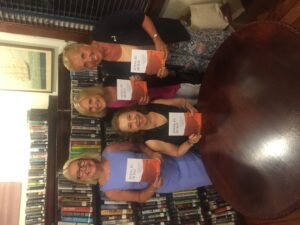 When my good friend and Vassar classmate, Robyn Travers, offered to pitch an Author Talk for me at the Jacob Sears Memorial Library, her local Cape Cod branch, neither of us realized that its event coordinator was Janet Robertson, another Vassar ’73 grad. They both did an incredible job publicizing the August 23rd event, which—with my publisher’s blessing, since it was 6 weeks before my official Oct 1 launch—included a reading and signing. There’s nothing better than the power of old school ties!

And that was only the first of the remarkable associations that manifested that evening. As I waited to begin my talk, I sat to the side of the podium (which I didn’t use, since I prefer to move, and because I’m so short, I would have looked like a literal “talking head” behind it), and overheard a mother and daughter talking. I had put postcards about the book on each seat. The young woman picked up one, turned it over, and remarked, “Mom, this is from my school!” I introduced myself, and asked if she attended Loyola University Maryland, home of Apprentice House Press, my publishing house. The answer was yes—she was a senior there—but she had come, because she had just spent 2 months in Dubai. Ah, synchronicity!

A few minutes later, I was surprised and delighted by Janet’s introduction. She was incredibly thorough, going as far back as my one-person plays. When she mentioned “The Queen’s in the Kitchen,” and my long ago status as a professional look-alike, I spontaneously did the wave. The audience laughed and I was over the hump before I’d spoken a word. Considering the subject matter of my memoir, I had been concerned that the talk would be too heavy. No worries. Between QE2 and the romance and fun of my bus stop wedding, there was plenty of levity. In any talk, especially one about an emotional subject, it’s important to make ‘em laugh, make ‘em cry. I did both.

The tears weren’t all sorrow; some were sweet. At the end of the talk, I read a Cape Cod scene featuring my Vassar friends and fellow drama majors, including Joan Bogden, who had given me her professional coaching advice gratis that very afternoon. Together the 3 of us had visited the Monomoy Theatre in Chatham, MA, where I had done 2 seasons of summer stock. Before the reading, I had given Joan and Robyn inscribed copies and told them not to look at Part Two. This was why. They didn’t know they were in it. I had managed to hold myself together, when I spoke of losing my husband, but seeing Robyn and Joan tear up while I read about our little jaunt, I almost lost it.

Afterwards, a woman approached the table where I was signing books, handed me her copy, and asked when I had performed at the Monomoy and in what shows. I told her, rattling off 5 or 6 plays. “I saw them all,” she said, “and I remember you.” I was moved and humbled. Actors and writers don’t always know their impact. When a moment like this happens, it is a gift. It’s not often that present and past merge so seamlessly. Now I can trust that, like my performances, my book will reach and touch strangers over time. The very point of writing it.